Exploring the Native American Experience in the Midwest

What is the experience of First Nations people living in the Midwest? Perceptions, misconceptions, and identity are explored in this second annual exhibition of First Nations artwork. Presented in partnership with the University of Wisconsin-Eau Claire American Indian Planning Committee.

Highlighting the works of Dawn Dark Mountain, an Oneida Indian artist from Wisconsin, Christopher Sweet, Ho-Chunk/Ojibwe from south central Wisconsin and Brittany Tainter, an Eau Claire based artist and a member of the Lac Courte Oreilles Tribe of Ojibwe.

Statements and biographies are written by the individual artists and are published with their permission. The views expressed are their own. All artwork pricing is set by the artist and is non-negotiable and non-refundable. All artwork sales are by commission with Pablo Center at the Confluence. Your purchase supports our endeavors to present quality visual arts programming that is free and open to the public. Thank you. 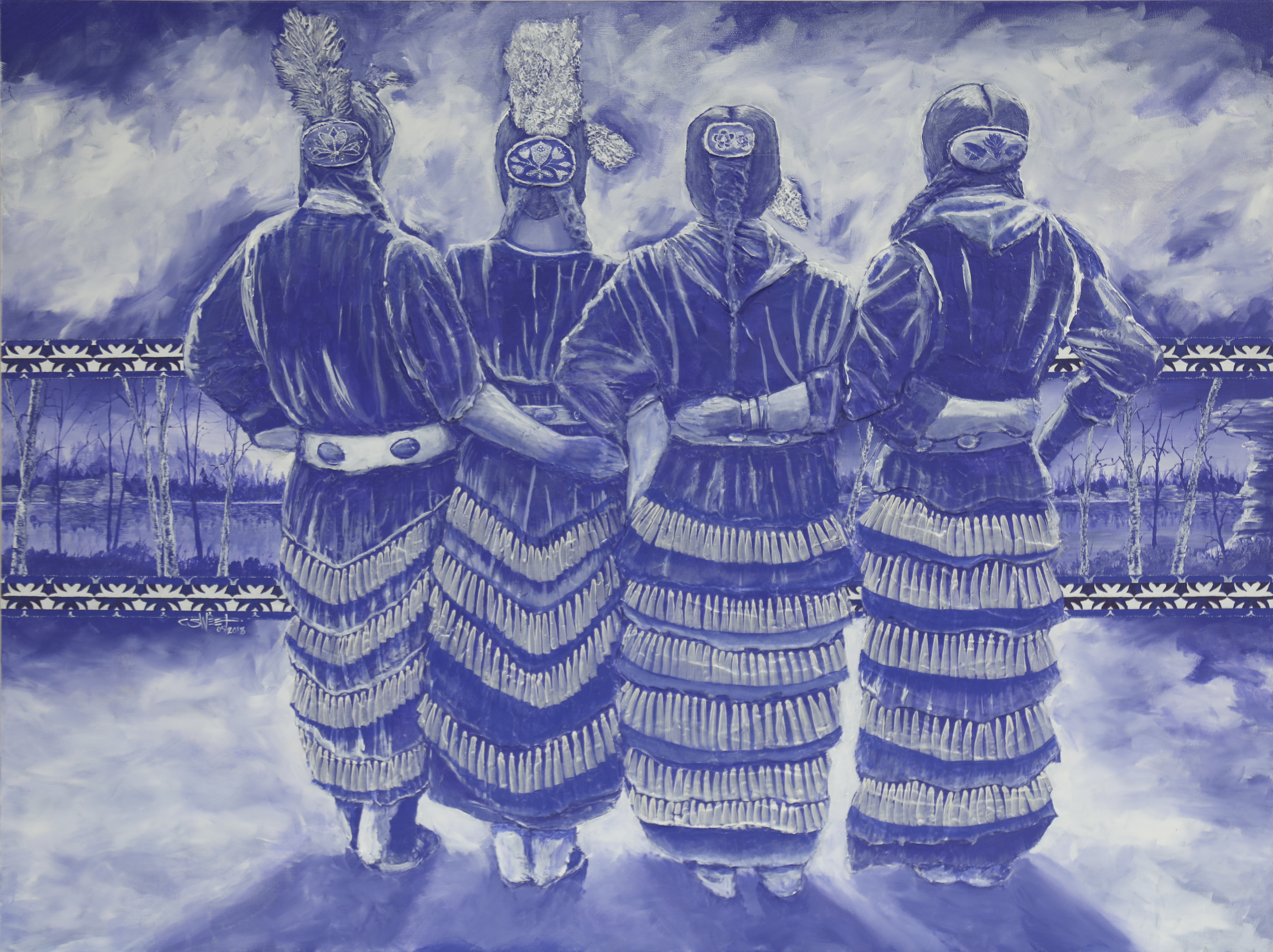 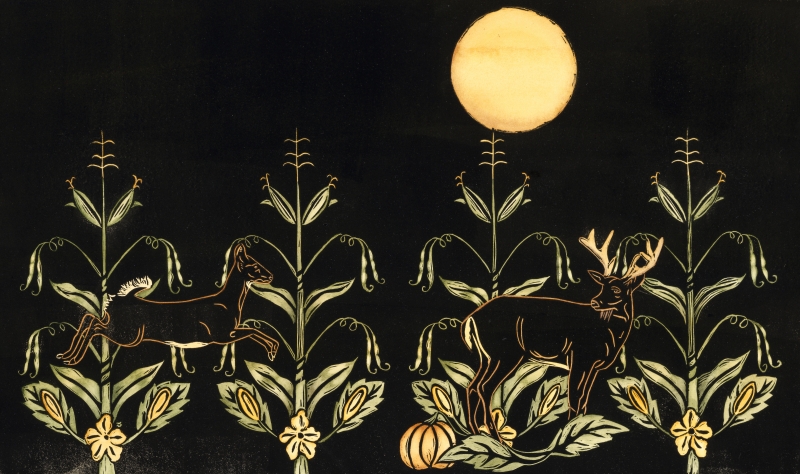 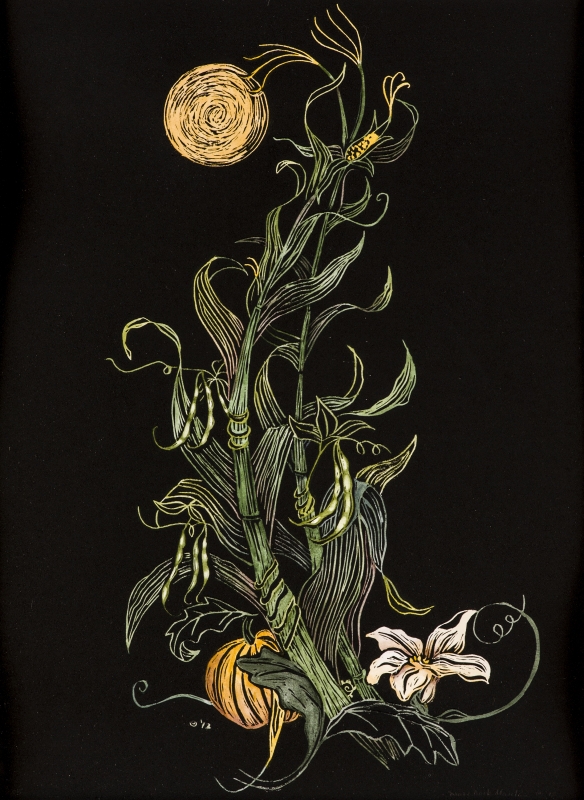 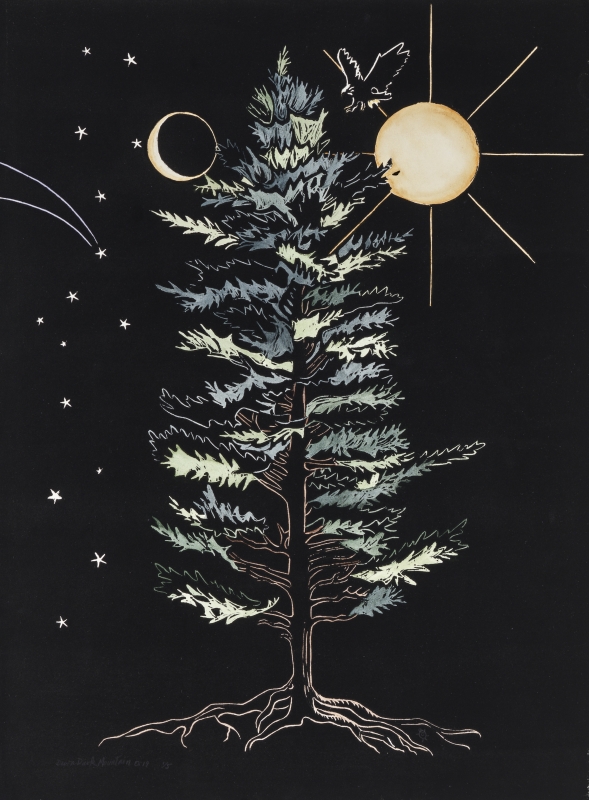 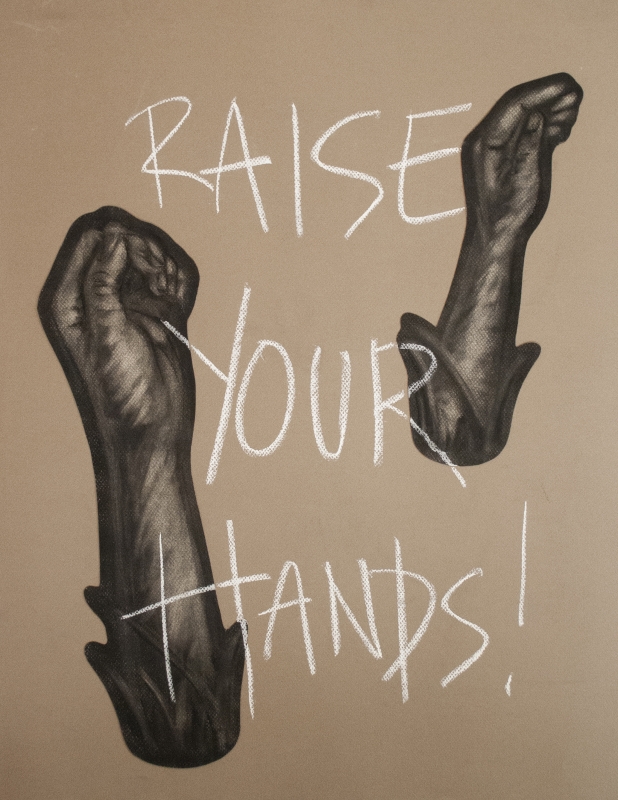 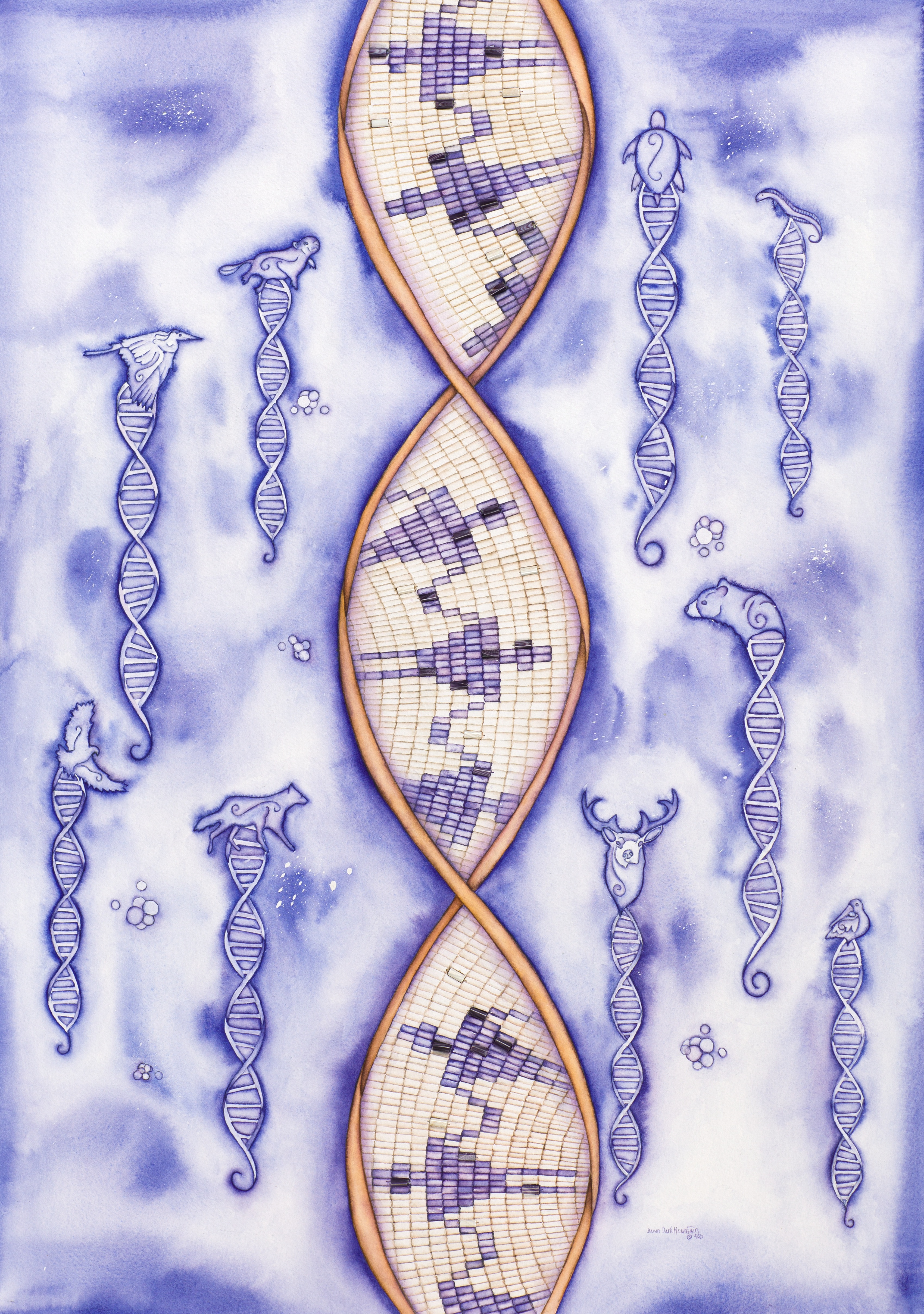 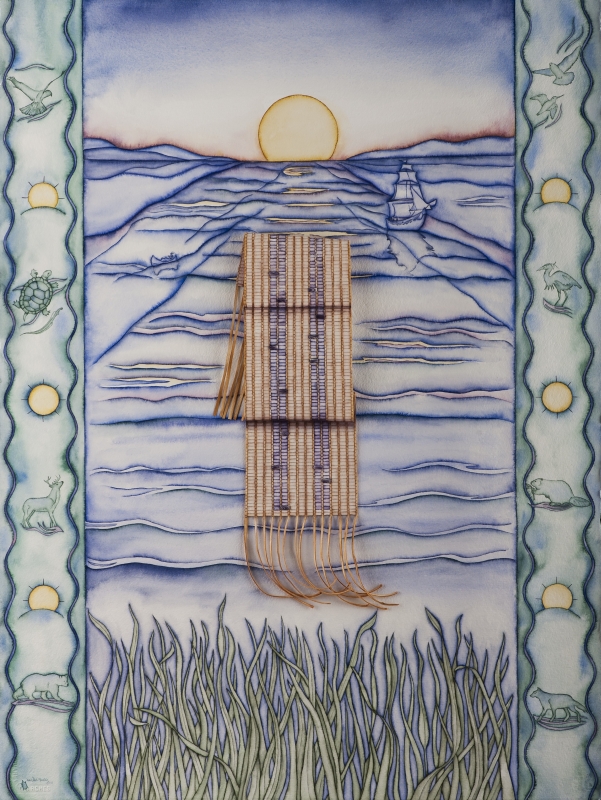 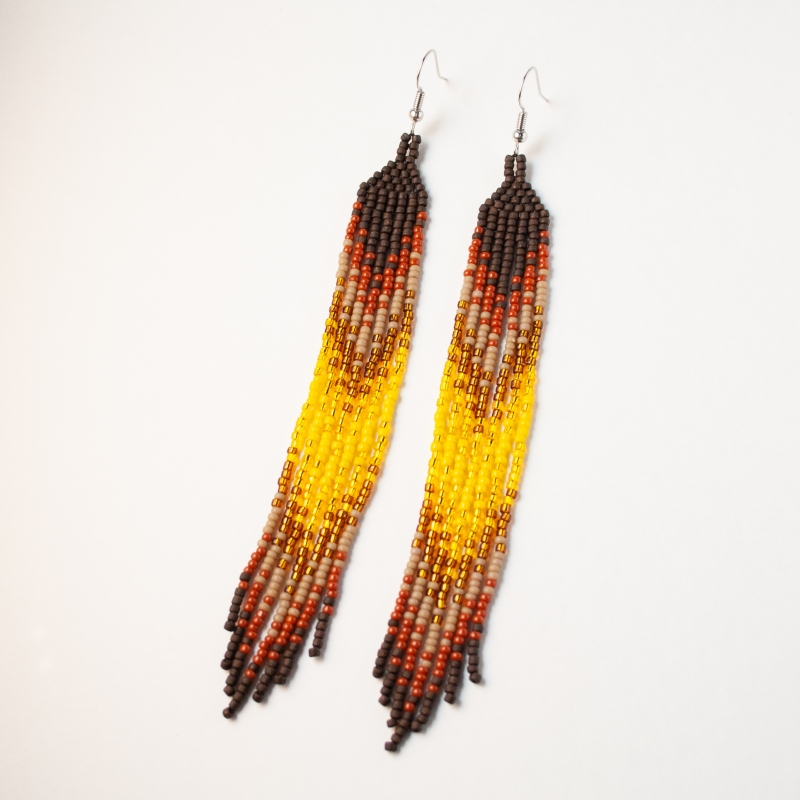 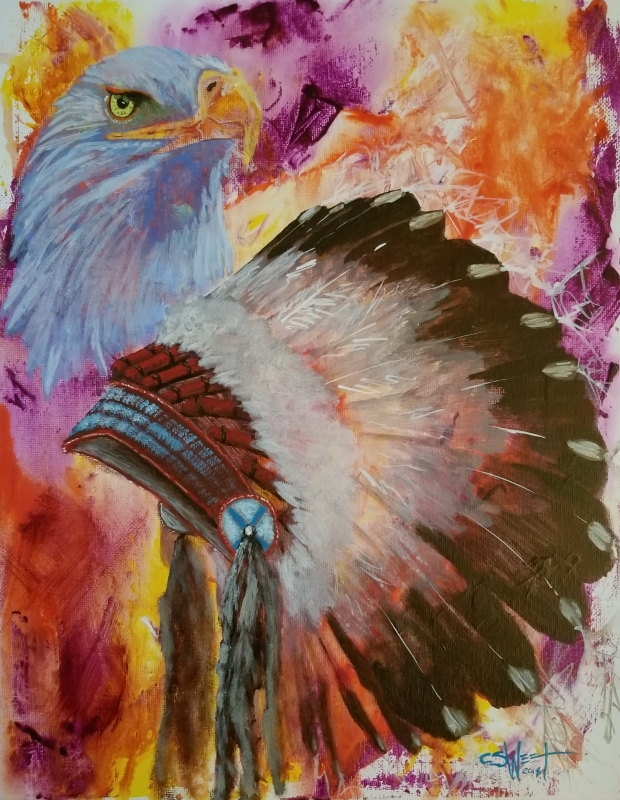 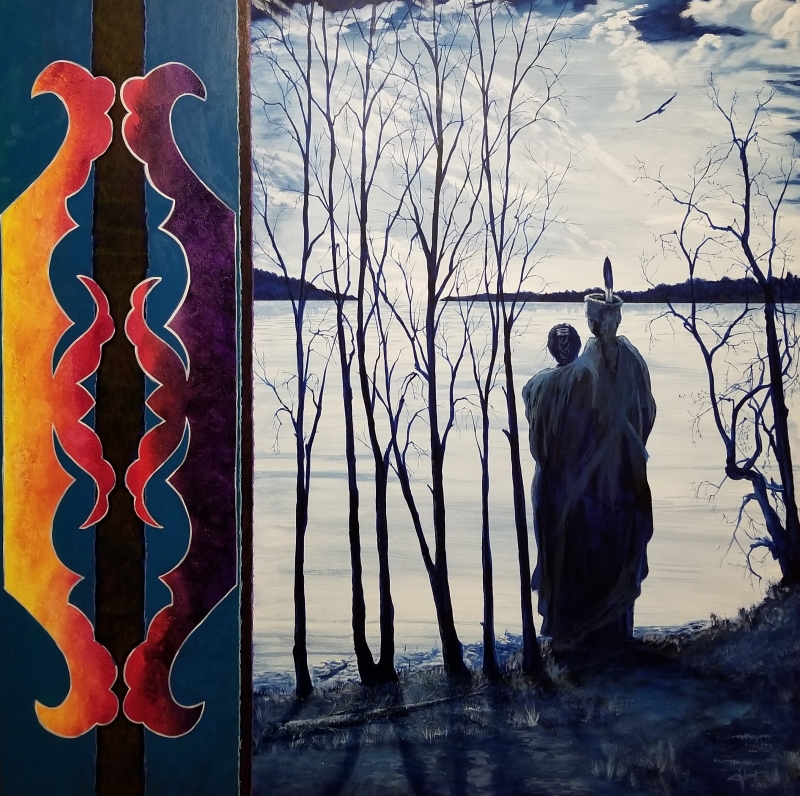 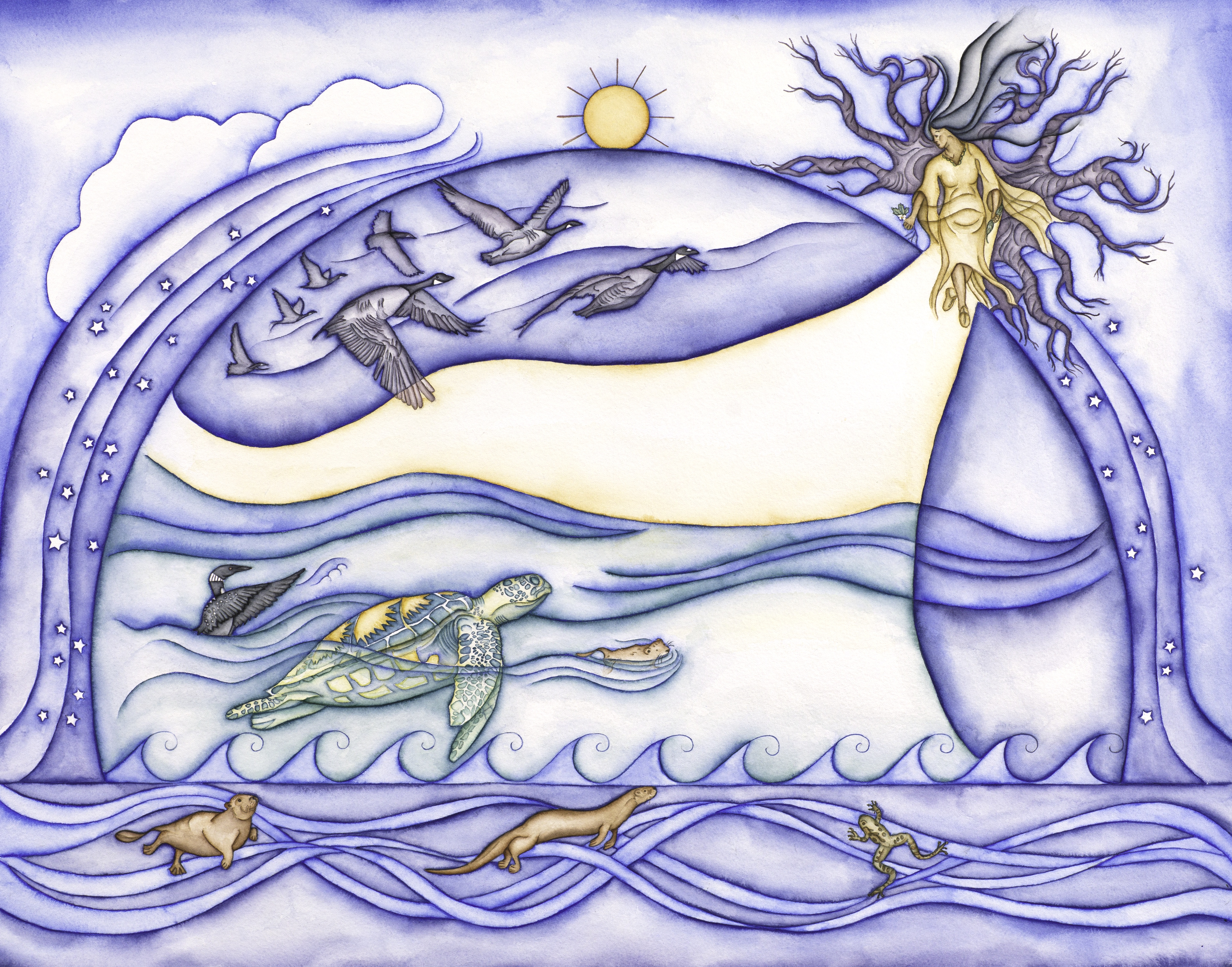 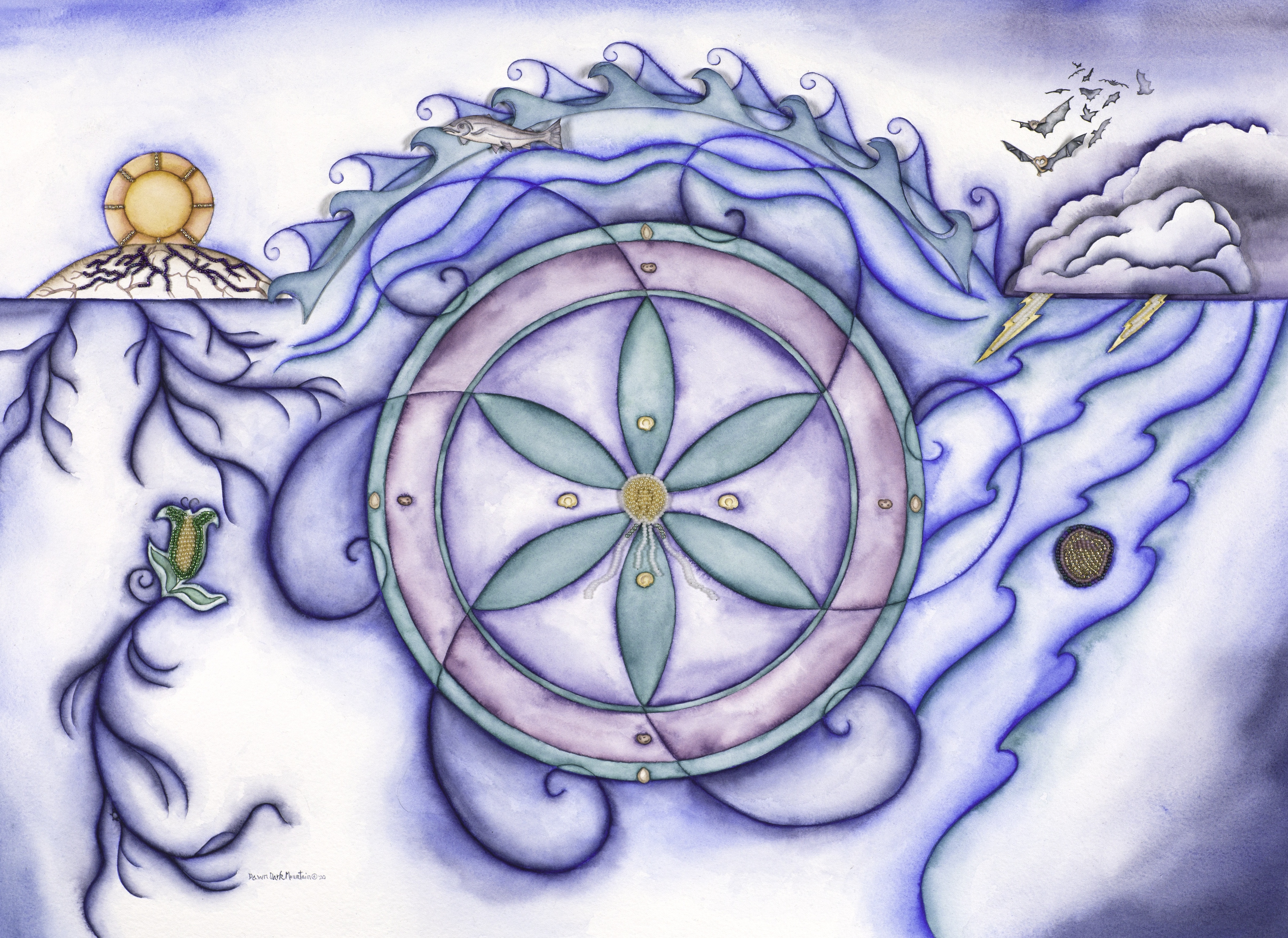 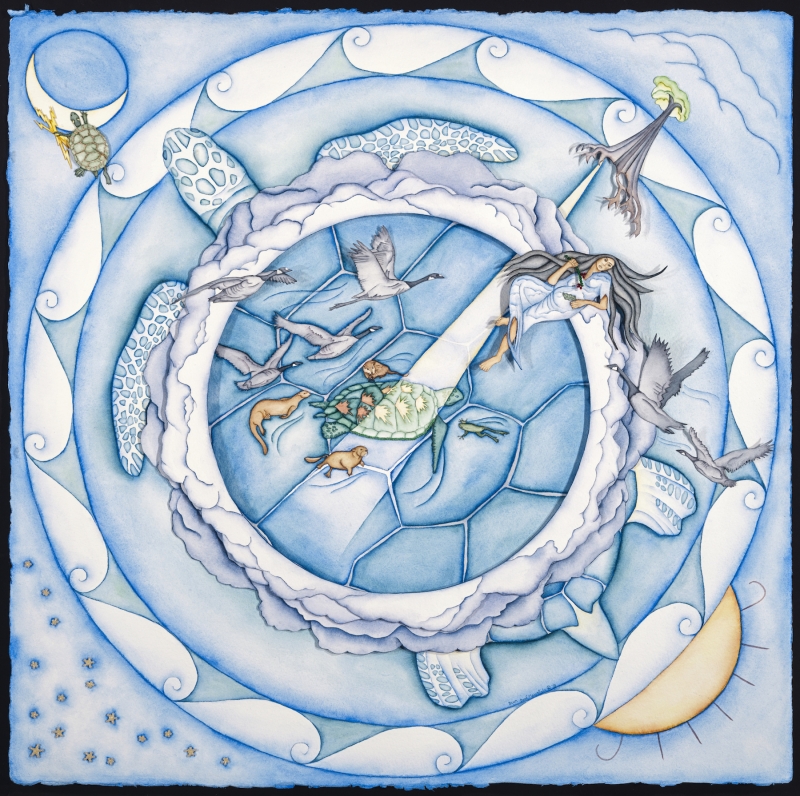 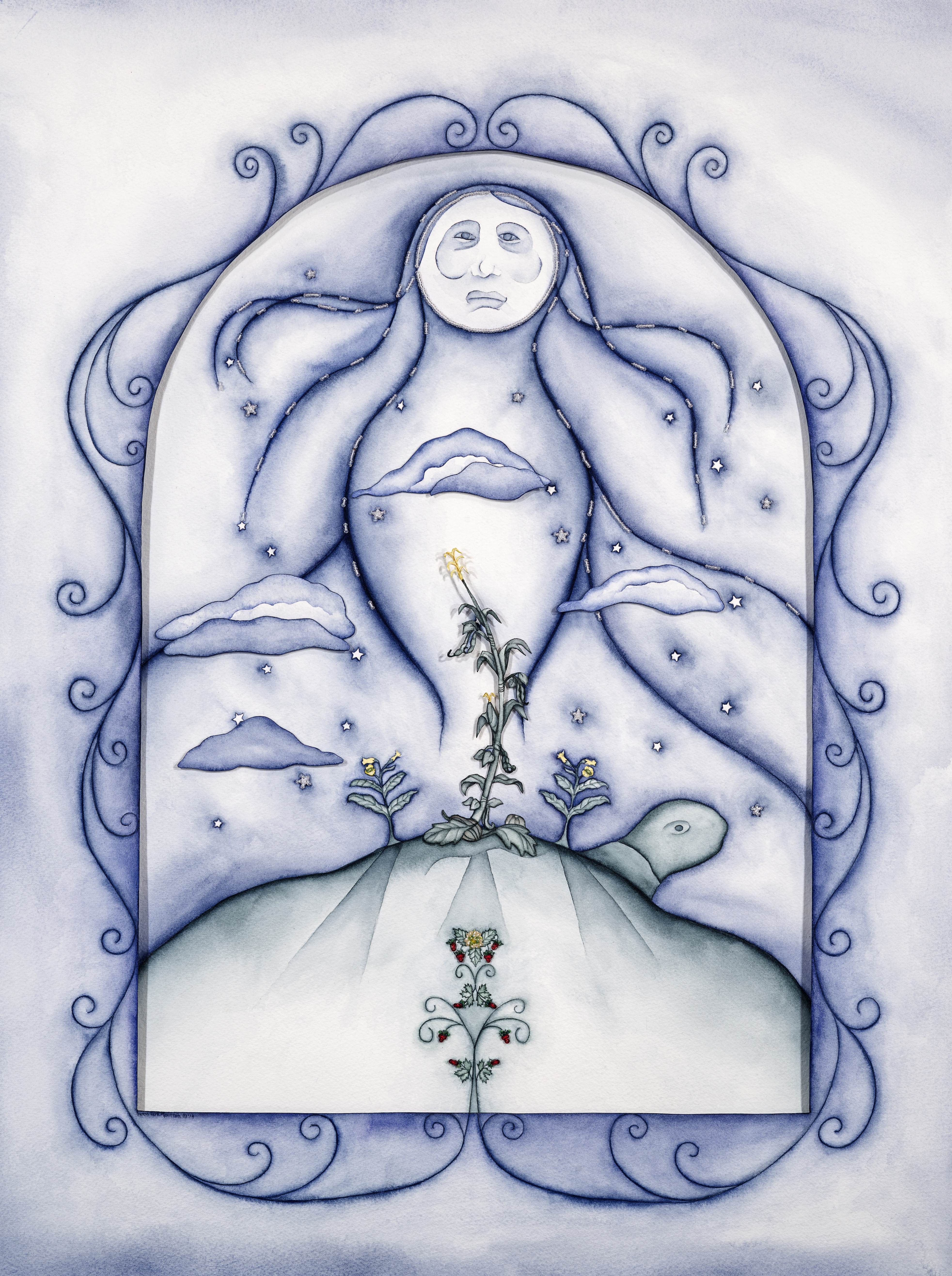 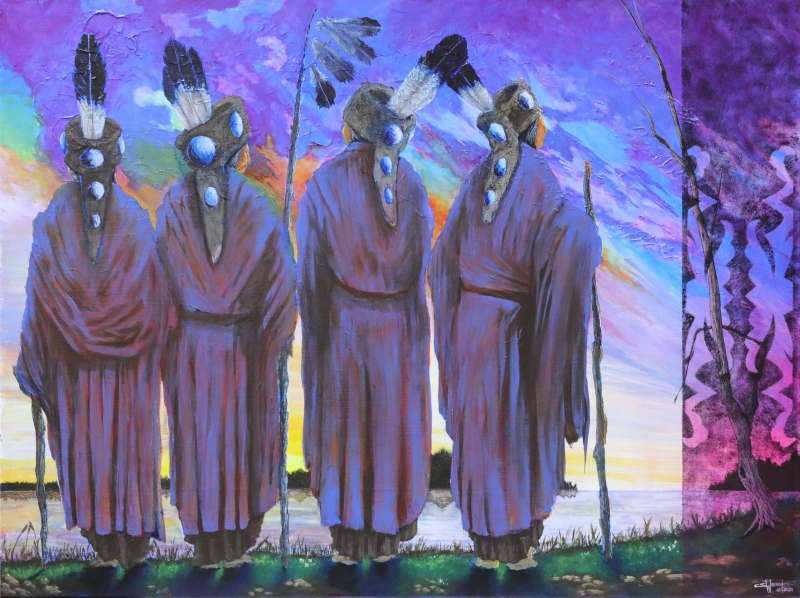 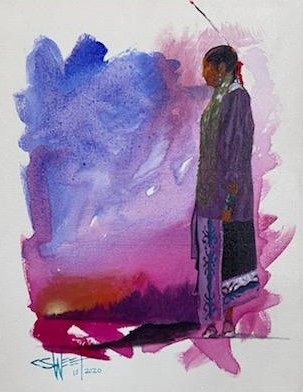 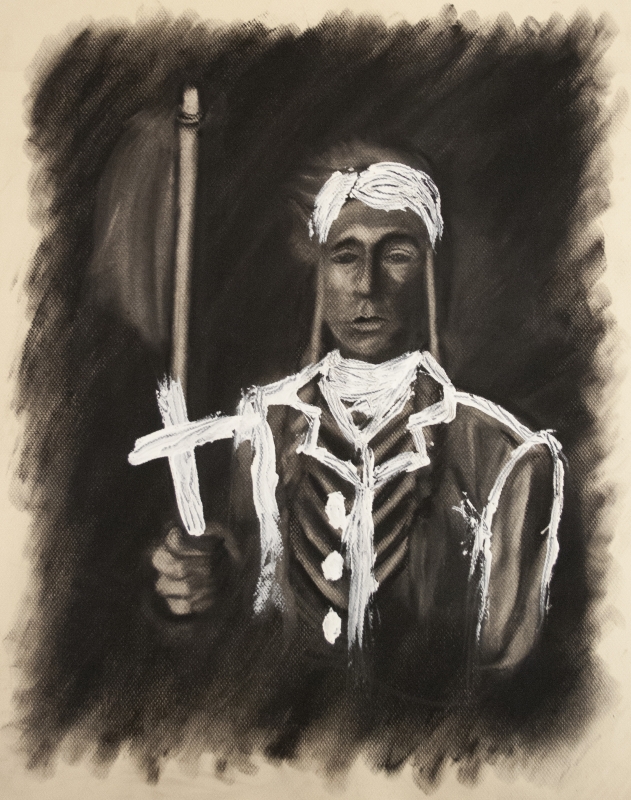 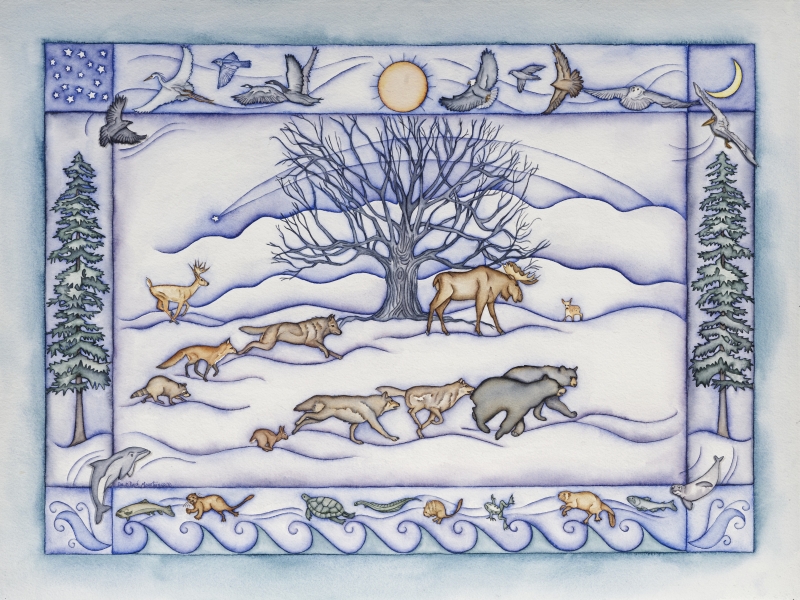 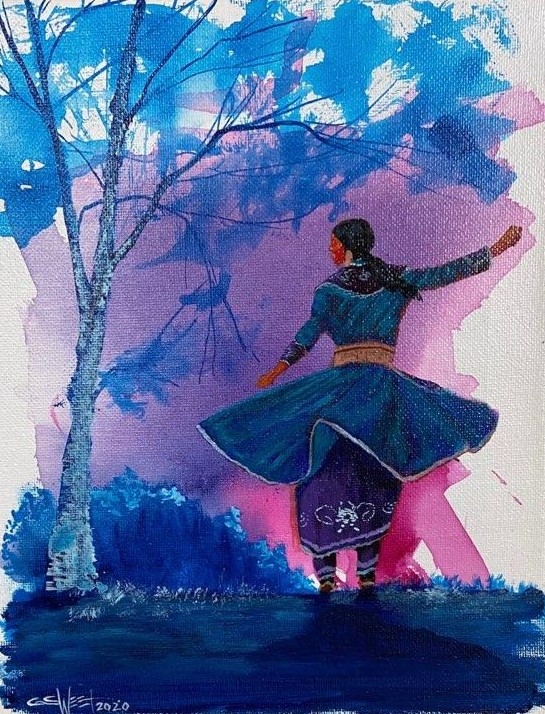 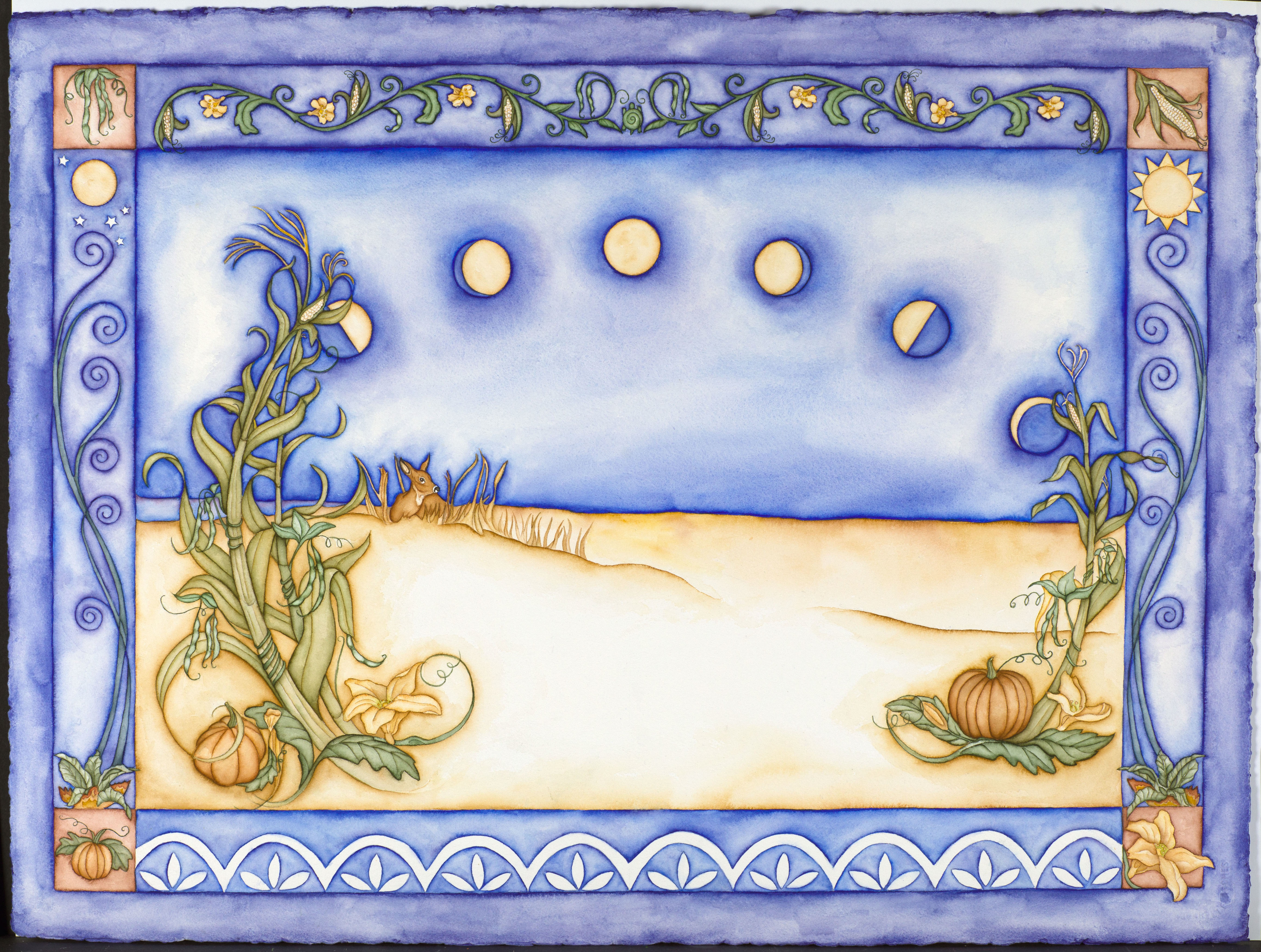 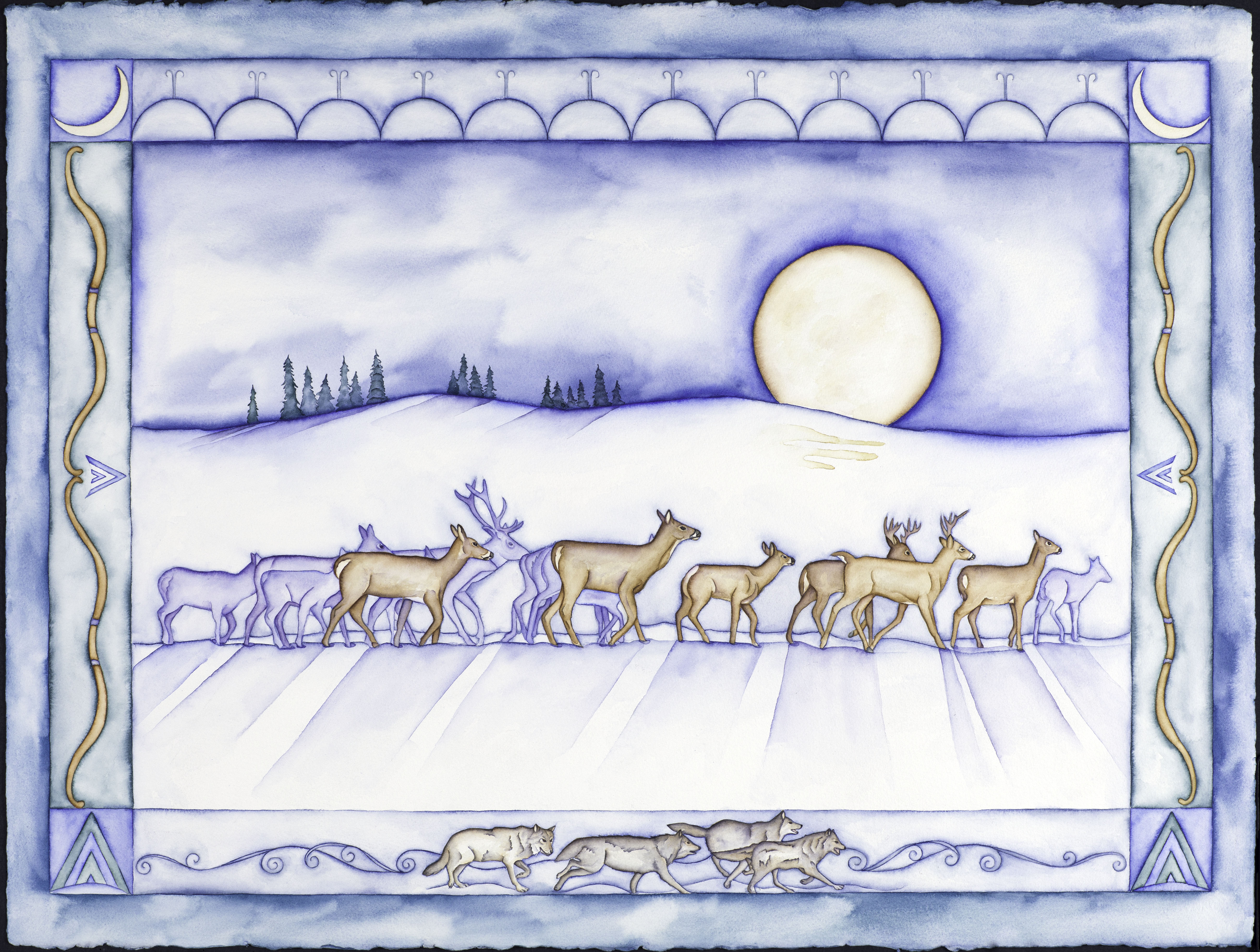 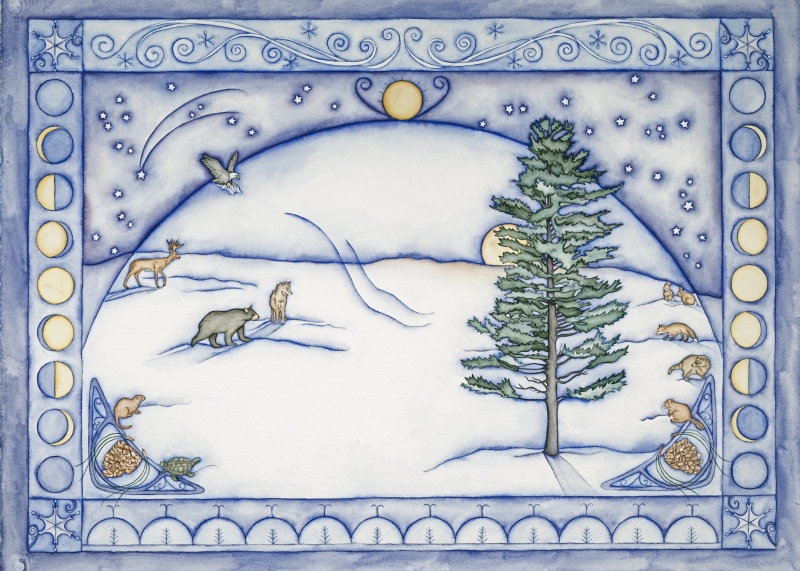 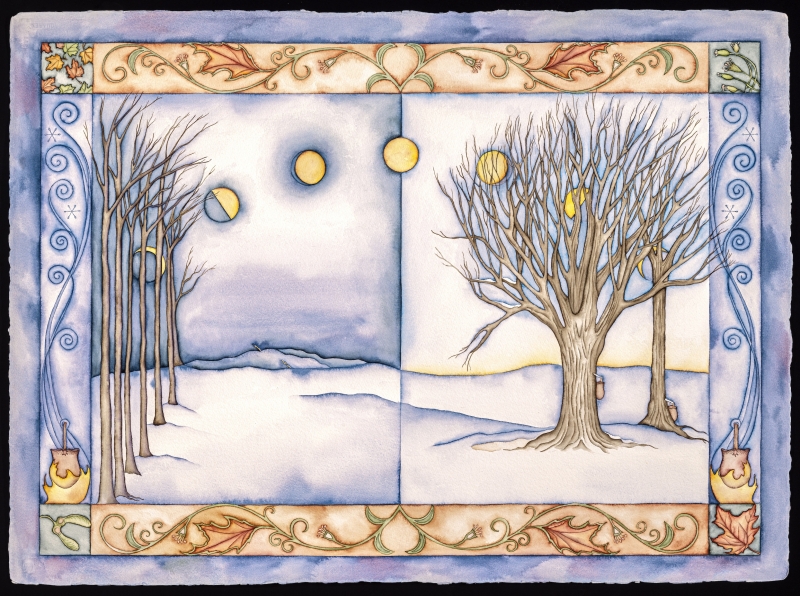 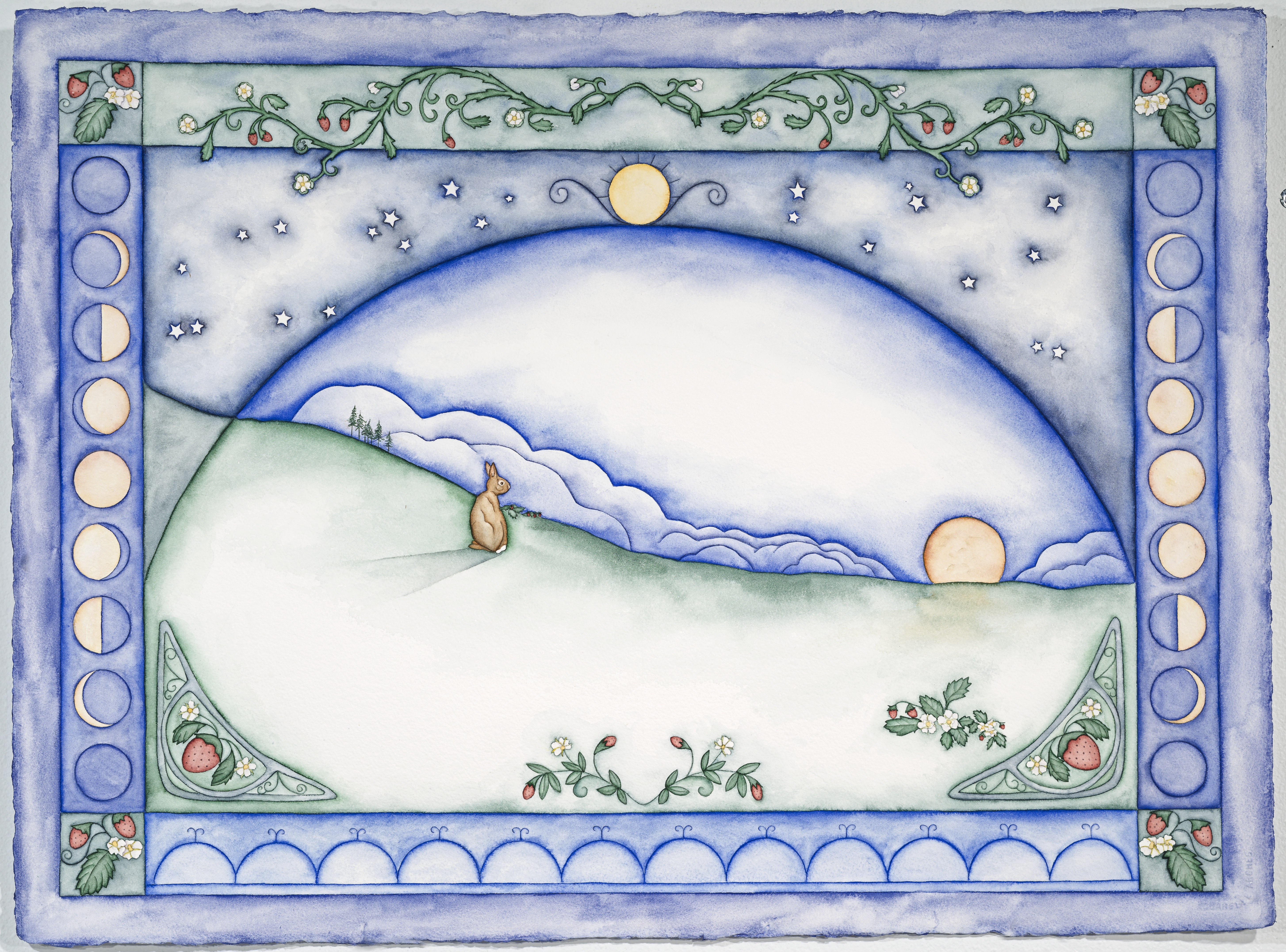 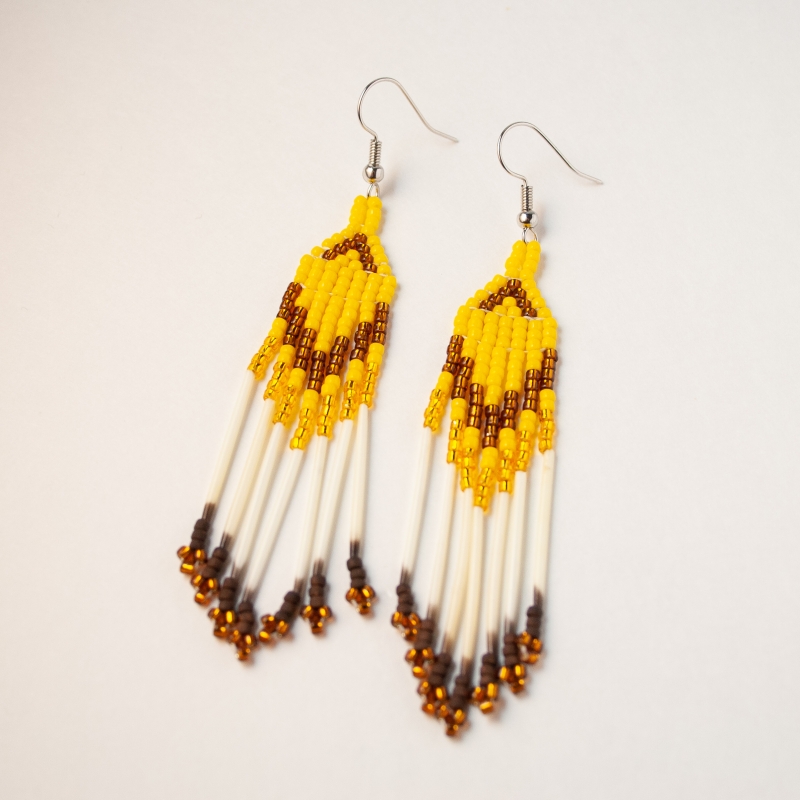 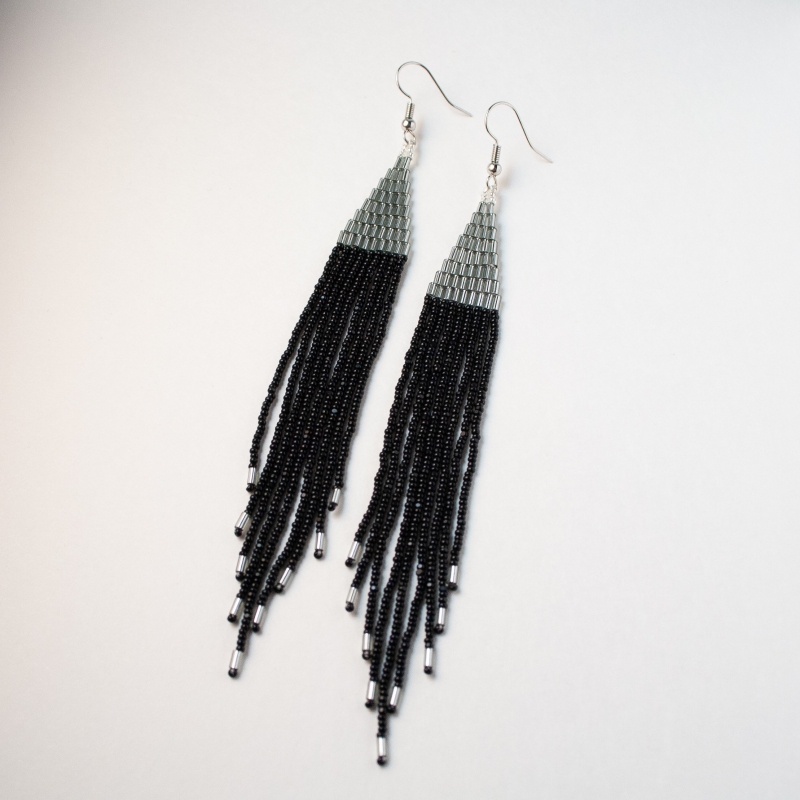 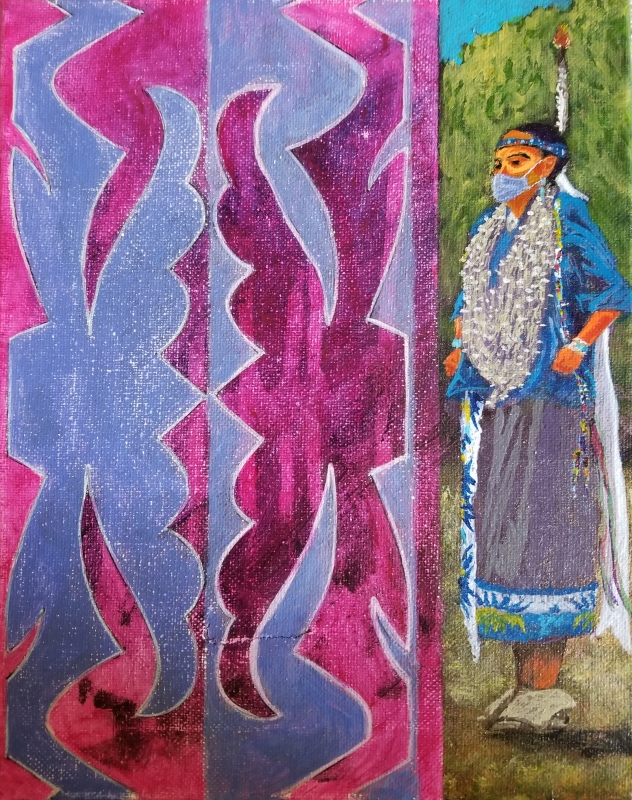 A Word From Curator Rose Dolan-Neill

Through the viewing of art in our virtual exhibits on our website, we can all have a common experience. We can gain an understanding of our community and our humanity by scrolling through the images of artworks that have been created by our region’s top artistic minds. We can reach audiences from across the world and those communities close to home that might not get to come into Pablo Center that often. Please be sure to read through the artistic statements and biographies of the artists on display, these words will add to the enjoyment and appreciation of the artwork and may give you further reason to purchase a work of art from Pablo Center. Who knows, it may even inspire you to take the next steps in your creative endeavor. 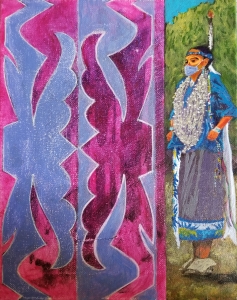 My Ho-Chunk name is Huuc Co (Hoonch-Cho) Blue Bear. My English name is Christopher Sweet. My family resides in the south central area of Wisconsin. I attended the Institute of American Indian Arts in Santa Fe, NM. A majority of my work is in relation to my Native American culture. I paint in miniature sizes to large murals. My main medium is acrylic on stretched canvas, but I also like to incorporate different texture techniques as well. Creating art keeps me focused on the important things in my life which include family, unity and healthy ways. I have a quiet nature and sometimes have trouble expressing myself, but art eases that challenge. I let my different moods, thoughts and feelings take shape on the canvas. My mind is always trying to find the right path in a painting, so when I begin a process there are sometimes a few ideas layered underneath the completed piece of work. It can be a long journey but it is always a therapeutic experience.

Christopher Sweet (Ho-Chunk/Ojibwe) from south central Wisconsin, studied at the Institute of American Indian Arts, Santa Fe, N.M. His work is intertwined with modern art and native culture. His work varies from still life to abstract, but his main focus is the, incorporating of unity and healing. “Art was a gift given, but not pursued. Experiencing the pain of losing two daughters put me in a bad place, but a woman I now proudly call my wife came in to my life, helped heal me and reunite me with my gift of art. Now I focus all my creative energies toward unity and healing." Christopher and his wife Chrissy currently reside in Milwaukee, Wisconsin.
​
Brittany Tainter 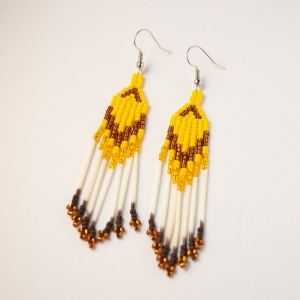 When drawing, I lean toward charcoal as my most used medium. I appreciate the way I can blend and create texture directly with my hands and it somehow feels like I can connect better with each piece create. Much of my artwork serve as a way for me to examine and process the thoughts and feelings that I have in relation to my Indigenous culture.

Through the creation of the drawings in this collection, I was contemplating the forced cultural assimilation of Indigenous peoples. In the past, thousands of Indigenous children were sent to boarding schools, many through force, where the goal was to eliminate the cultural teachings and ways of life that they had been brought up with. In some instances, the children themselves were eliminated. This cultural genocide was just one of the many forms of trauma that was inflicted upon Indigenous peoples, and it continues to have an impact on families and communities to this day. In contrast to my drawings, my beadwork deals in light and healing. Our trauma may play a role in our lives, just as it would in any other group, but Indigenous cultures are also full of beauty, knowledgee, and wisdom. Beading is one of those beautiful aspects and is one of the most prevalent mediums of artwork in many Indigenous communities. The act of beading and wearing beadwork itself are forms of medicine, so I approach each piece I create with intention and while in a positive mindset. I mostly lean toward colorful and striking designs, but I also appreciate the range of styles that I can achieve in my beadwork.

Eau Claire based artist, Brittany Tainter, is a member of the Lac Courte Oreilles Tribe of Ojibwe. Originally starting her career as a Graphic Designer, her work now crosses many disciplines and often references Indigenous identity and place. She owns Giizhig Design Company, a small creative agency that offers graphic design, copywriting, and other services. Since starting the business in 2017, she has expanded her services and now creates and sells custom beadwork.

Using stories and traditions from my own Woodland culture, I translate traditional Iroquois beadwork designs into patterns and borders in my paintings. I also try to use the traditional meanings of different designs in creating each piece.  The paintings themselves thus become visual stories, enhanced by the written narrative that I create for each one. My creative process begins with gathering these ideas and stories and developing a series of sketches, which will eventually be put together in a full-sized drawing.This drawing will then be transferred to watercolor paper. My actual painting begins with a series of layers of transparent watercolor washes. The smaller details are developed in the same manner, again using layers of transparent watercolor. I work with two brushes at all times, one to lay in the color, the other to control the diffusion of color with water. I lay the initial pigment in on dry paper, wetting the area near the line and following behind with the second brush to take the color where I want it to go. When the area is completely dry I may go back and lay in more pigment on the other side of the initial line and, using the same technique, create a line, which diffuses into the paper behind it. This creates the dimensional appearance of the painting as the “outlined” areas stand out from the background. As the piece nears completion, the details are emphasized and the darkest pigments are laid in. Some pieces are conceived with a “three-dimensional” aspect.

Inspired by the three-dimensional effect created by my controlled watercolor style, I have taken that effect to another level by actually creating a sculptural painting. These sculptural paintings include cutout pieces that are successively layered on top of the original watercolor painting. The layering is put together in such a way as to create a “three-dimensional” painting. This work expands on the idea of what a painting is; experimenting with three-dimensional formats, adding beadwork, wampum or other elements and taking the painting in a new direction. I also create works as relief prints using wood or linoleum blocks, printing with oil-based inks and adding watercolor to enhance the images. Recently, I have created monoprints using relief printing, watercolor collage and layering, including a triptych using all of these elements. My work has a strong connection to my cultural background. I also seek to draw connections between the cultures of the past and the contemporary life of Native peoples, following the paths that traditions and art have taken over the centuries and interpreting them in a new way.

Dawn is a member of the Turtle Clan of her tribe and she includes a turtle in every piece, sometimes obvious, sometimes hidden but always present. In addition to her paintings, Dawn also has a series of linoleum and wood block prints that are then completed with watercolor.   Each of these blocks is carved and printed by hand, making each print unique. Dawn has been the recipient of numerous awards and honors including a fellowship and awards from the Santa Fe Indian Market, an Artist-in-Residency and numerous awards at the Eiteljorg Museum Indian Market, Indianapolis, IN, and awards, including Best of Show, at the Tesoro Foundation Indian Market in Denver, CO among others. Dawn’s “Treaty Calico Series” about the Treaty of Canandaigua is part of the permanent collection of Contemporary Native American Art at the New York State Museum in Albany, NY. Dawn was commissioned in 2006 to design a Pendleton blanket in honor of the Oneida Nation of Wisconsin and created another blanket with Pendleton in 2011.

Her work has been on book covers and posters, in magazines, and on several CD covers including Joanne Shenandoah’s 2005 recording of “Sky Woman”.  Dawn’s work can be found in numerous shops and galleries throughout the United States.  She also markets her work at various art markets, art fairs and art shows including Santa Fe Indian Market, the Smithsonian Museum of the American Indian in Washington D.C., the Heard Museum in Phoenix and the Eiteljorg Museum in Indianapolis, IN.
Interested in purchasing a work of art?
Interested in a work of art exhibited in one of our virtual galleries or exhibits? It may be available for purchase. To purchase a work of art, contact Rose, our Visual and Literary Arts Manager.

All artwork pricing is set by the artists and is non-negotiable and non-refundable. All artwork sales are by commission with Pablo Center at the Confluence. Your purchase supports our endeavors to present quality visual art programming that is free and open to the public.