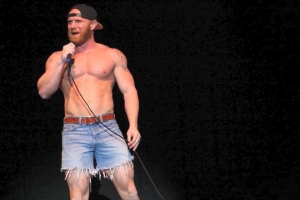 ROMPERS, GNATS, AND SWAMPY, HOT SUMMER DAYS – THESE ARE JUST A FEW THINGS THAT GINGER BILLY FEELS STRONGLY ABOUT.

Shirtless and tattooed, Ginger Billy gives viewers a unfiltered humorous look into life in rural Upstate South Carolina. And he’s doing it all on his own in his “Backwoods Comedy Tour”.

Based in Union South Caroline, Ginger Billy is one of the fastest rising comedians on the planet. With over 10 million followers across social media (around 5 million on Facebook and 4+ million on TikTok), sold out shows nationwide, close to a million YouTube subscribers, and around 80 million views of each of his videos, the new face of redneck comedy is taking over the genre.

He lives between Union and Lockhart, South Carolina, with his wife and family. For years he was a respiratory therapist, but one day after the retirement of Dale Earnheart, Jr., he thought maybe he’d make a video. The video has almost 840,000 views on YouTube alone, he estimates it got between 40 and 50 million views across all social media channels. From there, things took off he started touring with Catfish Cooley and other comedians.

But the new life has come with some adjustments. For a while, he was planning on keeping his respiratory therapist job and licensing in his back pocket, just in case. But once Covid-19 hit, he had to focus entirely on comedy. While his new comedy career may be a surprise hit, it’s stressful. He says, "Everything is dependent upon me being funny." Regardless of the stressers his comedic strives are continuous and growing. Ginger Billy's goal for his comedy career is to continue to give people a place to breathe for a while.