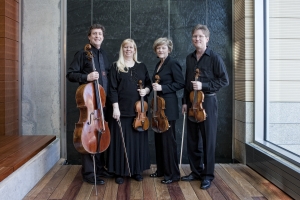 The Pro Arte Quartet (PAQ) is one of the world’s most distinguished string quartets. Founded by conservatory students in Brussels in 1912, it became one of the most celebrated ensembles in Europe in the first half of the twentieth century and was named Court Quartet to the Queen of Belgium. Its world reputation blossomed in 1919 when the quartet began the first of many tours that enticed notable composers such as Milhaud, Honegger, Martin, and Casella to write new works for the ensemble. In addition, Bartók dedicated his fourth quartet to the PAQ (1927), and in 1936 PAQ premiered Barber’s Op. 11 quartet, with the now-famous “Adagio for Strings” as its slow movement.

The Pro Arte made its New York debut in 1926 and toured the United States frequently under the auspices of Elizabeth Sprague Coolidge. The quartet was performing in Madison, Wisconsin in May 1940 when Nazi forces invaded Belgium. The University of Wisconsin responded to the emergency by offering the quartet a permanent campus home, the first such arrangement at a major American university. The UW Pro Arte residency became a model of artist residencies that is now widely emulated throughout the country.

Thank you to our program sponsor.