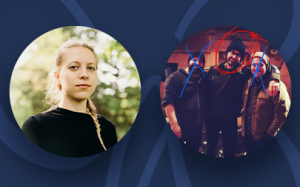 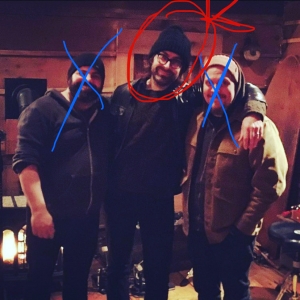 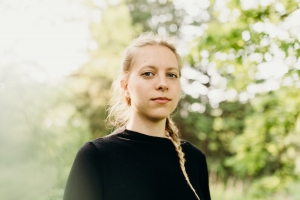 This event has been postponed and will be rescheduled in spring 2021. In the meantime you can watch our previous Pablo Stream performances HERE.

Celebrate the turning of seasons by snuggling up with your favorite people, fall cardigan, and warm beverage at home with our Pablo Streams fall series. Bringing you an eclectic mix of old favorites and exciting new guests, we are keeping the music alive and feeling the fall vibes.  Humbird and Alpha Consumer play as part of the fall Pablo Streams series.

Most of us have never attended a virtual performance, so here is the breakdown on how to register for and attend these events:

If you have any problems, questions or concerns, please contact us at info@pablocenter.org.

Combining a wintry longing with the warmth of a familiar folktale, Humbird stretches between experimental folk and environmental Americana to embrace the unexpected. This music invites a refreshing dissonance into the house, it leaves breadcrumbs along the path and reflects light back at the stars. Humbird’s debut album Pharmakon (Aug. 2019) is a “...an absolutely hypnotic listening experience” according to Folk Alley. Atwood Magazine describes it as music wrapped in “gentle rebellion”.

Months after its initial release, Humbird’s debut continues to resonate with listeners, wracking up online streams and (more importantly) connecting with listeners all over the world. Inspired by artists like Joni Mitchell, John Prine and Big Thief, Humbird crafts songs of American mysticism rooted in the grit of the upper midwest.

The members of Alpha Consumer have played music with Bon Iver, The National, Jenny Lewis, John Prine, Arcade Fire, Big Red Machine, Andrew Bird, Tortoise, The Notwist, The Lone Bellow, Bruce Hornsby, Anais Mitchell, the Tallest Man on Earth, The Suburbs, Sandra Bernhard, Hiss Golden Messenger, Bonny Light Horsemen, Phil Cook, Damo Suzuki, Mouse on Mars, Brother Ali, Eyedea, Swamp Dogg, Joe Lovano, Tim Berne, John Medeski, Steve Cropper, Vernon Reid, Mark Guiliana, Tony Malaby, David King, Shazad Ismaily, Ethan Iverson, Craig Taborn, Anthony Cox, Ron Miles, Evan Parker, Reid Anderson, members of Prince's New Power Generation, and probably some other folks they can't think of at the moment. There was this one time that some members of Alpha Consumer played the music of Ornette Coleman for Ornette Coleman at the Walker Art Center on his birthday... that was pretty cool. The members of Alpha Consumer have played music on 5 continents at countless storied venues, and on Saturday Night Live, the Tonight Shows with Conan and Jay Leno, Letterman, Fallon, Colbert, Ellen, Later with Jools Holland, and the Late Late show with Craig Ferguson. Nevertheless, the most rewarding music the members of Alpha Consumer have played in the last 20 years or so has often been their own, and they will continue to make time for that till the wheels come off.

This will be virtual, streamed event.